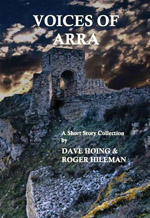 While Hammon Falls was our first published collaborative effort, it’s not our last. Our short story anthology Voices of Arra has been published by All Things That Matter Press, the same people who did Hammon Falls. It’s a collection of stand-alone short stories, all set in the fantasy world of Arra, which Roger and I created several years (ahem, decades) ago. The stories are arranged chronologically according to the action of Dave’s as-yet-unfinished fantasy trilogy The Myth of Bones. Five of the nine stories have been previously published. Below is the acknowledgment page from Voices of Arra, followed by the introduction to the anthology. As the publication date nears, we’ll post teasers of some of the stories.

Be forewarned: although Voices of Arra is technically in the same genre as Tolkien and Harry Potter, these are not your Daddy’s fantasy stories. Most of them are gritty, hard-edged affairs, and none of them have elves, dwarves, wizards, rings of power, dragons, or the other trappings of the fantasy genre. There’s only a kind of telepathy, and a world with two species of humans—three, actually, if you count the hybrids that occur when the species mate…

From the back cover:

Welcome to Arra, a harsh yet strangely beautiful world. From a frozen northern outpost to a tropical rainforest, from marshy hinterlands to volcanic islands, from great cities to architectural ruins, Voices of Arra depicts people, ordinary and extraordinary, who tell their stories in their own words:

The tales examine emotions, intrigue, and the consequence of choice. Stripped of most of the usual trappings of the fantasy genre, they are by turns graphic, lyrical, vulgar, and philosophical, but always realistic and intensely human.

“City of Ice” is chapter two of The Myth of Bones, and is published here as a separate short story for the first time.  © 2010 by Dave Hoing.

“Brothers of the Stone” is published here for the first time.  © 2010 by Roger Hileman.

“A Transitional Death” is published here for the first time.  © 2010 by Dave Hoing.

INTRODUCTION TO VOICES OF ARRA

At least that’s when the world of Arra first made an appearance. There were no Lyhians, Drun, or Cresyns then, no crowmasters or shorn women or Brothers of the Temple, and no Fever. There were only geographies, mythologies, and genealogies filled with the names of unwritten characters.

My high school chum Roger Hileman and I had already been composing music together for a couple of years when we got the idea for an ambitious fantasy/science fiction tableau. At the time we weren’t ready to do much actual writing, and what little we did manage was, well, not very good. For the most part, we had created a foundation with nothing to support, a skeleton with no muscle or sinew or blood. Time and distance took their toll, and our notes for Arra were stuffed away in Roger’s files. There they sat for many years.

Segue to the early 1980’s. At coffee one night another friend, Paul Finch (not the British writer of the same name), had an idea for a disease that affected only the left half of the brain. Those afflicted with the Sinistral Fever, as he called it, lost much of their rational and linguistic skills but gained astonishing artistic ability. People who got the Fever eventually evolved into a separate species from those who didn’t. Thus were born the afflicted Drun and the unafflicted Lyhians, along with a hybrid of the two, the Cresyns.  Paul isn’t a fiction writer, and although I am, I only typed up about 20 pages of this fascinating premise before being carried away by other projects and other circumstances—and those pages, alas, are now lost to posterity. And so another promising beginning went unfulfilled. Until…

Skip forward a decade and a half to 1997. I had decided, belatedly, to write a novel using Paul’s ideas. Of course, the Lyhians, Drun, and Cresyns had to live somewhere, and as I began to ponder what kind of world I would need, I remembered the foundations of Arra that Roger and I had created more than 20 years before. Amazingly, he had held on to all that material. As I began to write, I found that everything—characters, genealogies, mythologies, and setting—blended together surprisingly well, and the result was a massive fantasy trilogy called The Myth of Bones.

Except for “City of Ice,” which is chapter two of the first book of The Myth of Bones, the stories in this collection are based upon the trilogy, but are not part of it. They are arranged chronologically according to the sequence of events in the novels. Thus, “Tashi’s Future Lover,” set some three years before Bones begins, is first, and “Servant of the Stone,” set sixty years after it ends, is last.

NOTE: Voices of Arra is now out of print.